ON STAGE PROGRAMME
17:00- 18:00 NOT THE END a joint performance by all the participants, Facilitators: Kids in control, Belfast

18:00 – 19:00 FROM DIARY OF DASA F.  / WORK IN PROGRESS  open rehearsal, The Inventura Association, Prague
Acted by Dagmar Filípkový, Josef Fojt, Jaroslava Krpálková, Martin Vošmik, Ilona Labuťová, Štěpán Smolík
This performance is inspired by diaries of an actress of Theatre Inventura where the images of rough everyday reality of a mentally handicapped woman interact poetic images of her dreams about what reality could look like.

Theatre Inventura is currently developing a performance which combines the authentic testimony of people with learning disabilities and the sense of stage space.

The focus is on the specific resources of expression of our actors and relativity of handicaps or disabilities without using any cheap sentiment, feelings of guilt and insufficiency.

19:00- 19:30  „Violent“  by Sinead O’Donnell – performance art, Belfast
Performer: Sinead O’Donnell
Sinéad O’Donnell has worked in performance, installation, site and time-based art for the past 15 years. Originally from Dublin and based in Belfast, Sinéad studied sculpture at the University of Ulster, textiles in Dublin and visual performance and time-based practices at Dartington College of Arts, graduating with distinction in 2003. Her work explores identity, borders and barriers through encounters with territory and the territorial. She sets up actions or situations that demonstrate complexities, contradictions or commonality between medium and discipline, timing and spontanaeity, intuition and methodology, artist and audience. She uses photography, video, text and collage to record her performances which often reveals an ongoing interest in the co-existence of other women and systems of kinship and identity.  Sinéad’s practice is nomadic and travel has broadened her cultural perceptions and influenced her artistic sensibilities regarding time and space. She is active on the Belfast performance art scene working with local organisations to foster performance art activity and supporting emerging artists in her community.
Recent work has been presented at In Between Time, Bristol (2013), RITES, Singapore (2012), Mobius Performance Space, Boston, USA (2012), Southbank Centre, London (2012) Golden Thread Gallery, Belfast (2012), Contemporary Art Factory, Tokyo, Japan (2011), My Land festival, Croatia (2012), Black Market International, Belfast (2012), National Review of Live Art, Glasgow (2010).

‘erasing HER history’ by Sinead O’Donnell

Performers: Karen Morgan , Sarah Longman and Mickel Smithen
About the programe: ‘Three members of the Joy of Sound present a cabaret-style tribute to the experience of taking the highly individual self through a transformative collective process.  We will be exploring the barriers, resistances and liberations inherent in such dynamic interplay.’

“The Shhhh! of Jam”  music&movement performance, Joy Of Sound, London

ZET6 provides a forum for persons with disabilities where professional performing artists can develop artistic, working both in workshops and in production.”Since I dance and play in theater, I am for the first time in my life happy with my body,” S.DB, dancer with disabilities. The  ZET6 works mainly with adults with mental and physical disabilities. Currently Zet6 active in various organizations and day centers across the Brussels Capital Region. Every question is a function of the basic objectives views: the equivalent role of persons with disabilities.Also Zet6 is in  a two-year European project with nine partners  from different countries. “Guia” (Guide Us Into Arts). In March 2012 all the partners came to the DeZeyp for a grand three-day festival with wonderful performances. The De Zeyp groups traveled to several European capitals to have to act or take part in workshops. 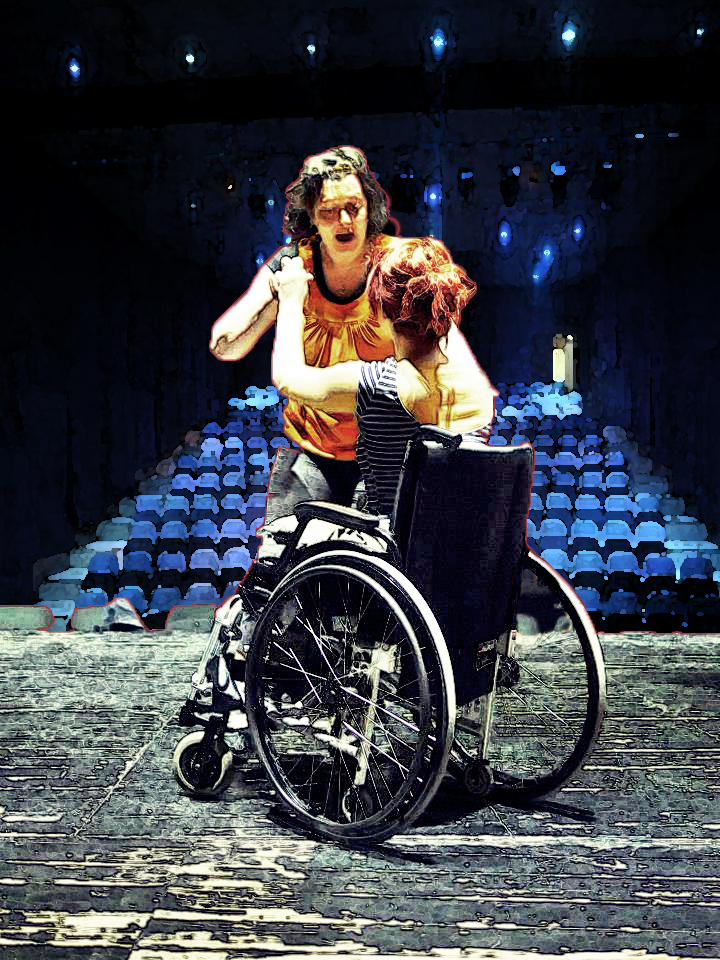